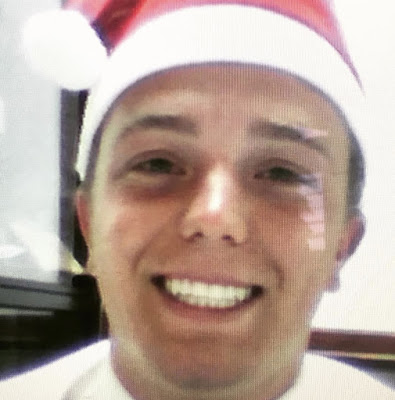 Elder Copeland was able to call home and talk to his family for Christmas!  They were all thrilled to talk to him!

I hope you all had the best Christmas ever and that you were all able to celebrate the birth of our Savior Jesus Christ.

Tuesday.  Today I went on a Division with Elder Christensen, which was so fun.  On the way there, this drunk dude started talking to us about how he needs Christ in his life.   After a little, he just started crying so hard.  It was so weird because he kept talking about how Arnold Schwarzenegger is his friend ahahhah.  We went to go teach a guy and we were trying to explain what the word "restoration" meant to this one guy, and he just couldn't understand. We did examples and everything.  After making it as simple as possible, we asked him what it meant and he said basically, a ¨restaurant.¨  Don't know how he got the answer, but he did haha.  Also, I met a missionary that served in Spain and his Mission Presidents were the Deeres from Alpine, so that was so cool

Wendseday.  Today we went up to Otavalo and did another Division with the Zone Leaders.  We had such a cool experience though.  Elder Chistama and I saw this old guy in a wheel chair try and get it to the taxi with the help of his son and his old wife.  So we ran and helped them, and after we walked away, the son came chasing after us and told us that he had to hear our message.  So we did and he loved it.  He told us the story of his life and it's the saddest thing ever.  He got beat as a kid and had no friends.  So he just started painting and his paintings were unreal!  He was one of the coolest guys I've ever met.

Thursday. Not too much crazy happened today.  We taught some of our investigators, and that's basically it.

Friday.  We taught a new guy, and he was so cool.  He told us how much he loved the purpose of our message, and he told us that when we told him that Joseph Smith was a prophet, he just knew right away, which was a cool first.  He was such an awesome guy.

Saturday.  Honestly again, not much happened today.  We contacted in the rain forever and not too much happened.  But still a good day to be a missionary ahah!

Sunday.  After church, we went to go find a cool couple that we found on the bus.  They were so cool to find and they were great people.  Basically, all that happened today.

With much love, Elder Copeland 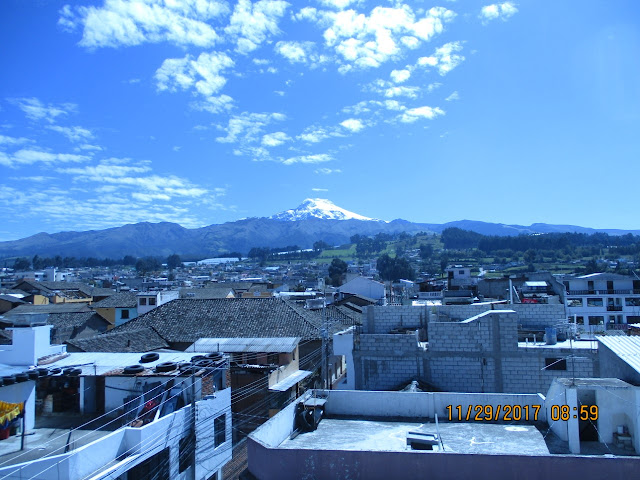 The Volcano of Cayambe 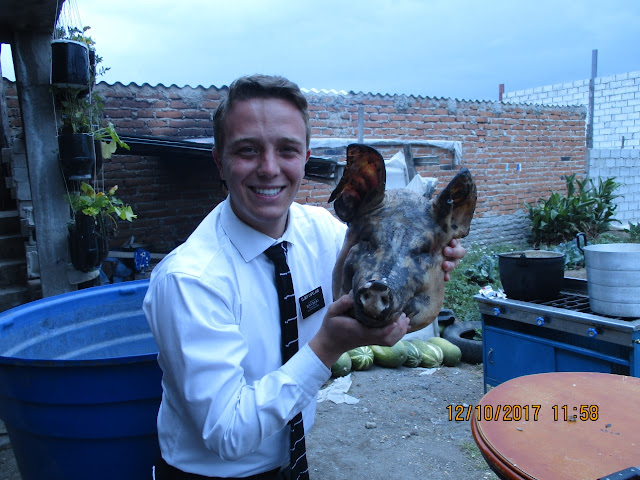 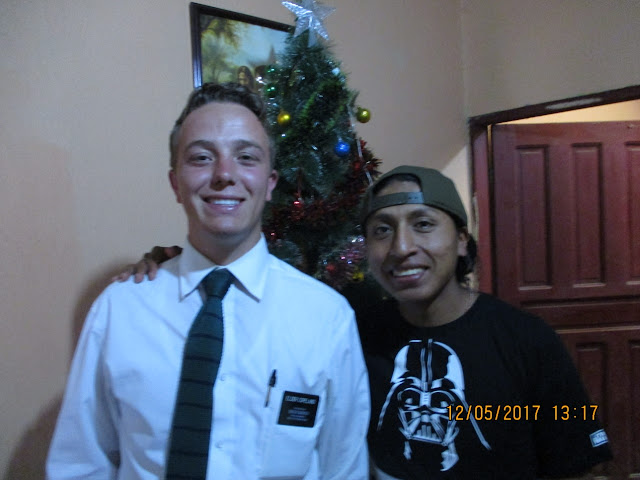 The Elder that served with the Deeres 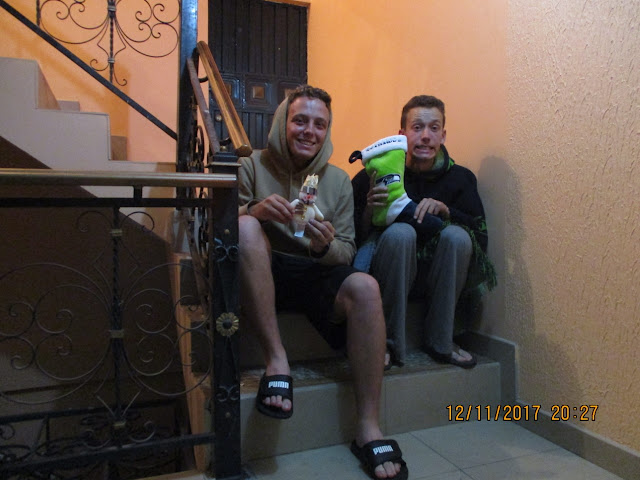 My Christmas Eve Lunch.  Waiting for our presents.

NAVIDAD we watched Moana and ate Chicken Nuggets for Dinner.  Yeah!  Best Christmas ever!!
Posted by Laura Copeland at 7:53 AM No comments:

No, I didn't see Star Wars, and yes, I know that it came out.

Tuesday.  Today we went into Quito for a Zone Conference and we went to the house of Pres. Murphey.  It was honestly so fun. 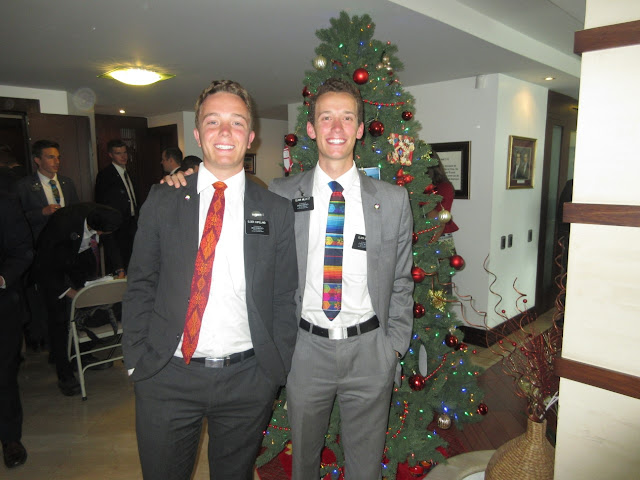 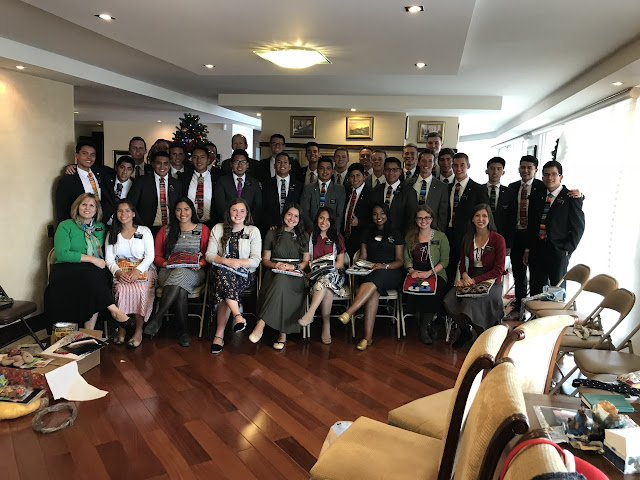 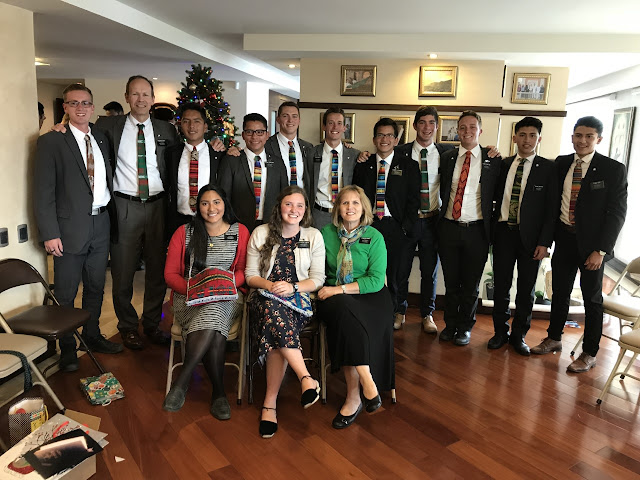 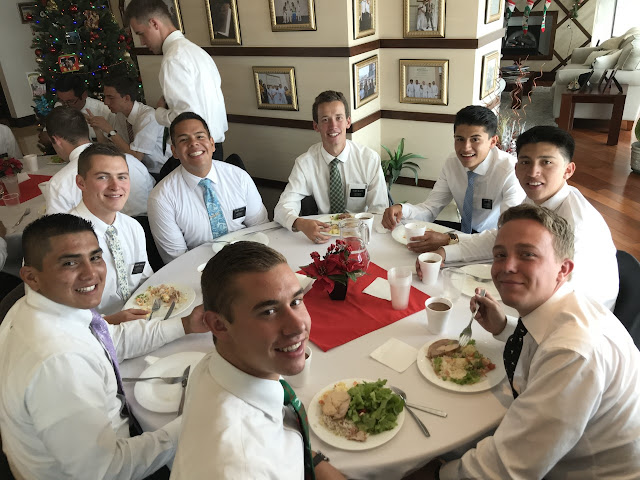 We talked about some stuff, but something that stuck out to me was something Hna. Murphey said.  She was talking about how missionaries think that Mission Presidents only want numbers and baptisms, but in reality, they just want these people to receive the greatest gift they can receive and that changed my entire aspect of the mission and my investigators.  Great day in Quito though.  We played some games and talked.  It was awesome.

Wednesday. Today was not the most eventful day, to be honest.  We went and taught some investigators, got Fam Madruñero ready for their baptism, and answered all of their doubts.

Thursday.  Today was kind of the same.  We had a really good lesson with one of our investigators, Andres.  He's really cool.  He had cancer when he was a kid, so we talked about the Plan of Salvation.  He loved it  and wants to be baptized.  He just works a lot, so were trying to help him be able to come to church.

Friday.  Today I went on an Interchange with Elder Vega (he's from my group, from California) and it was so cool.  I got to meet all of their investigators and they were so cool. That's the best part about going on interchanges.  You get to see all of these amazing people that are trying so hard to change their life.  And even better, I get to be a little part of it.

Saturday.  Today was the baptism of Fam Madruñero and it was so amazing--one of the coolest things I've been part of. I got to baptize the mom and the cool part about it is, is that she was born on the same day and year of my mom (love you, Mom.)  But Christian was baptized before I got here, so he got to baptize his little brothers.  He's planning on going on a mission when he turns 18.  Ahhh!  I love them so much. 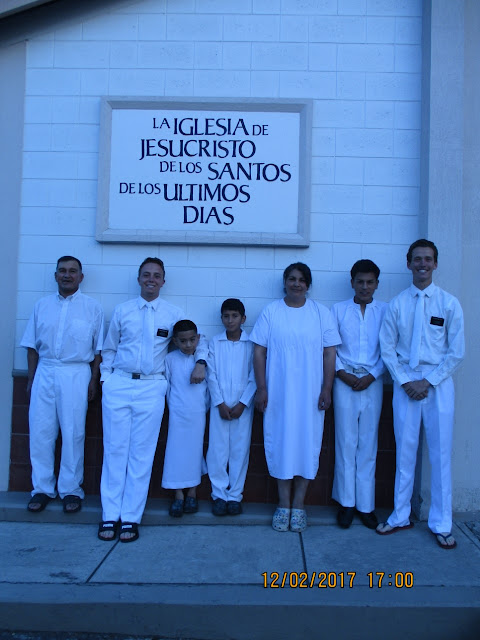 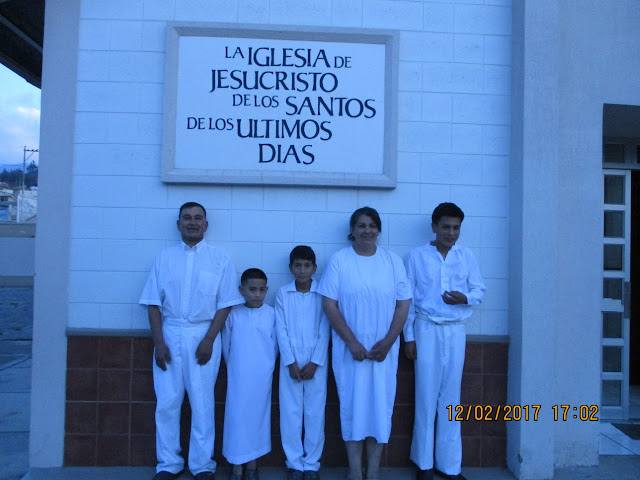 Sunday.  We got to contact forever today, so that was really fun.  But we got to teach Nancy again and she brought more of her family over, and it was so cool.  They are all so interested now.  We're working really hard with them so that they can have the "best gift on the planet." 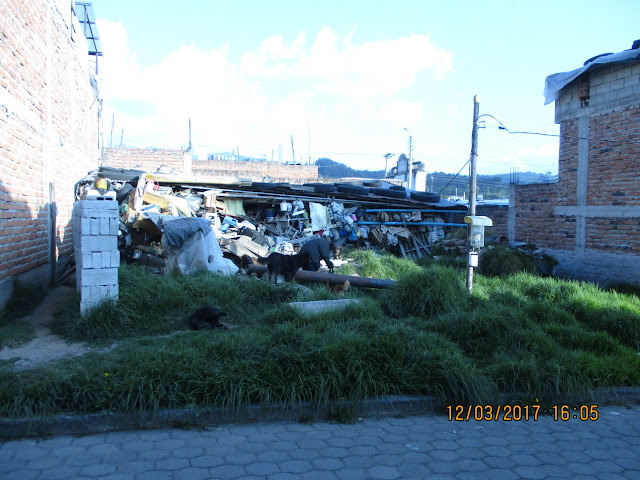 (Elder Copeland stated:   "A hoarder's house just made of things he found on the street.  And his 100 dogs chained to it.")
Posted by Laura Copeland at 1:03 AM No comments:

Tuesday.  Today was an awesome day.  I got to meet an investigator that has been wanting to talk with us for awhile because her husband just passed away.  She was so happy to see us.  She is doing a lot better now, but it was nice to be able to see her change her perspective on life with the Plan of Salvation, which was such a blessing.

Wednesday.  Wow, what a day today was!  We received a reference from a guy that lives about an hour away, and he told us that he wanted to talk to us.  So we went to go see him and we got to the spot.  It was in the middle of no where. We couldn't find him or contact him, so we said a quick prayer and we called him one more time and he answered. We got to teach his family and everything.  He's had a really hard life, and he loved us.  He told us that God sent us to change his life, so he took photos with us and filmed our lesson with him so he can show his other daughter.  He did come to church and bore his testimony on his one lesson that he had with us. His name is Edison.

Thursday.  Today I went to a different sector with Elder Flores, and it was pretty fun getting to know more of their investigators.

Friday. Today we didn't do too much.  We contacted and found some new investigators that were actually really cool. I'm excited to go with them again.

Saturday.  BOOOM.  First part of the day we went to a giant park we have here in Cayambe.  One of the Elders dressed up as Santa, and we contacted everyone.  It was so fun. 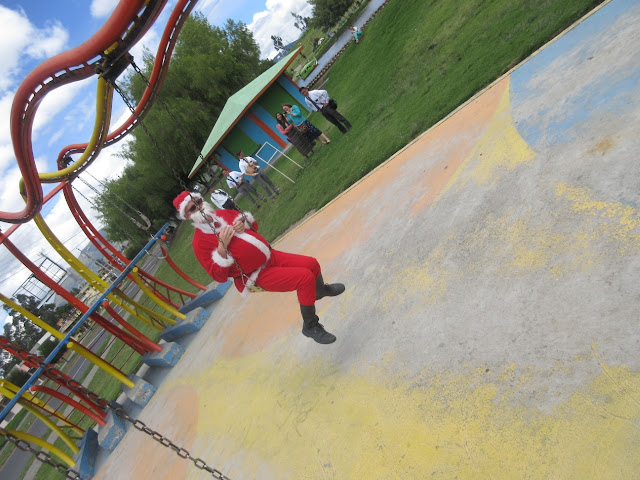 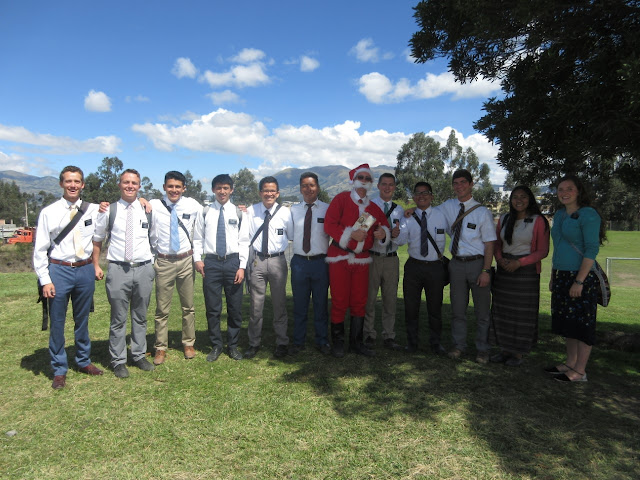 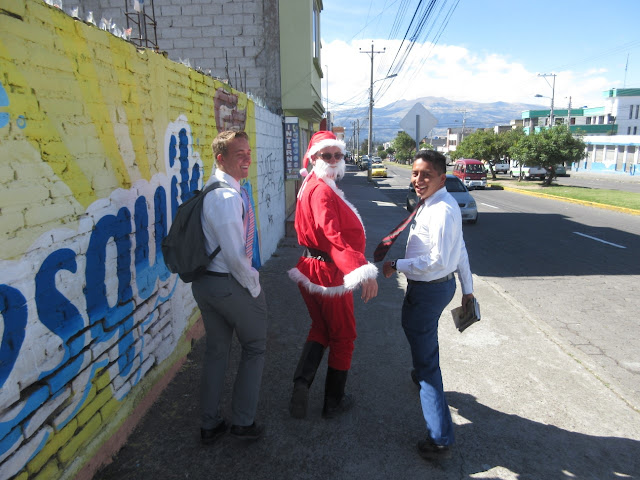 After, we got everything ready for the baptism.  We baptized Diego (22) Jose David (14) and Mateo (10).  The dad went inactive a while back and really wanted to come back to church--same with his kids. The baptism was so amazing.  It is always the best feeling ever seeing people change their lives. 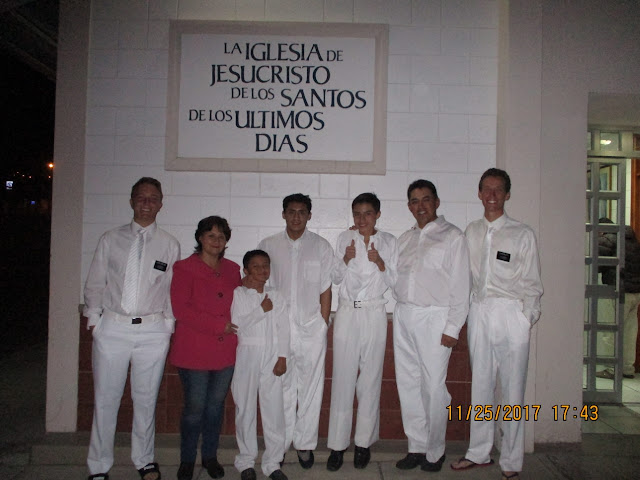 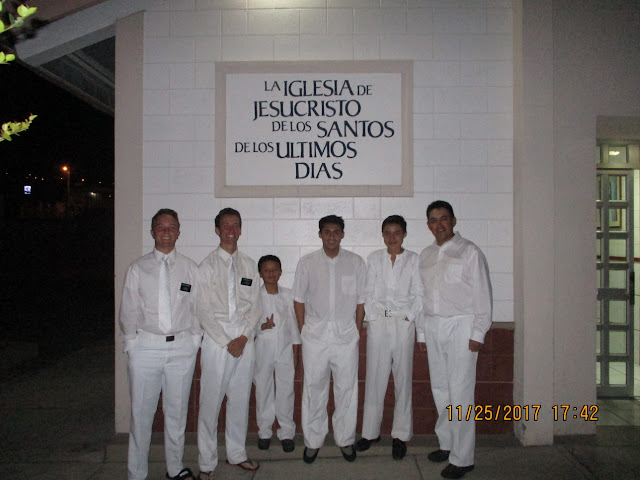 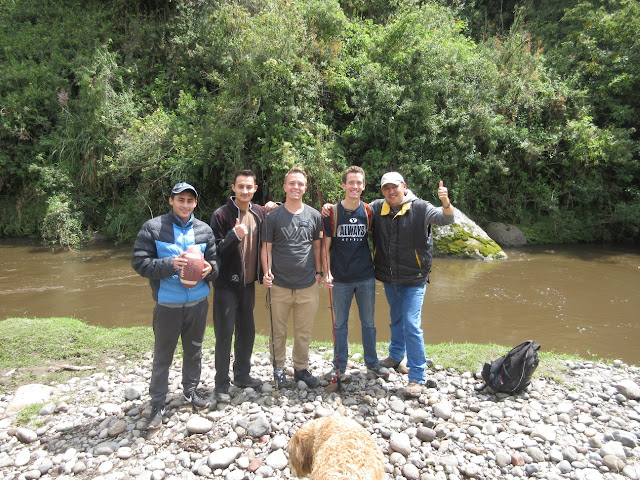 The Trujillos are all the coolest people ever.  They're like my best friends.  We went fishing with them for P-day. 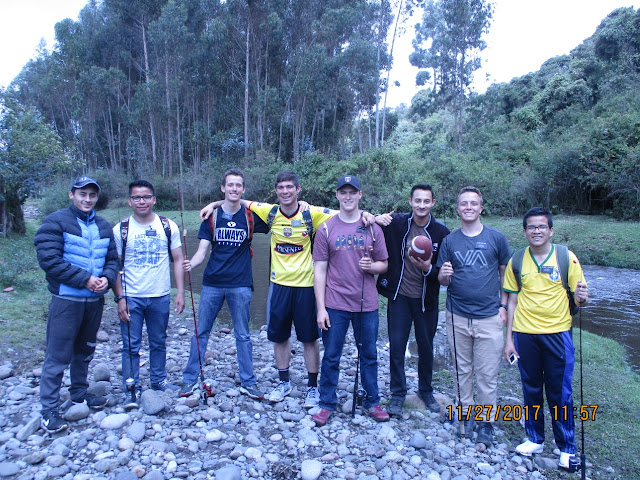 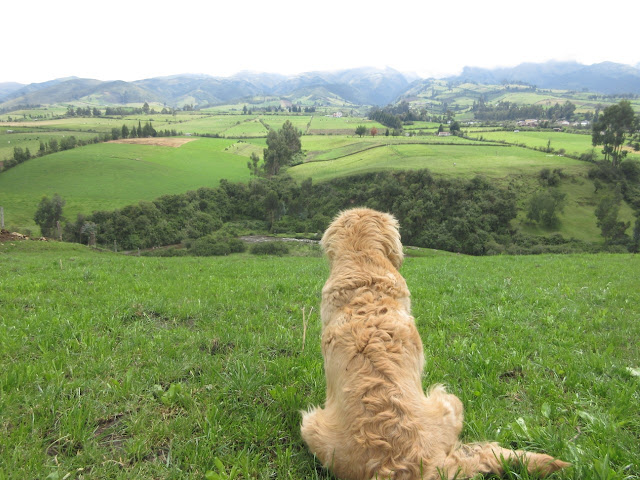 The view of the fishing area.

Sunday.  Was a crazy day.  We had a lot of people come to church and also visited a lot of others.  Honestly, just a crazy day, especially because it was raining and lightning the whole time, but we found some amazing people today.

The pictures below show some of the interesting animals the Elders meet up with as they travel throughout their areas! 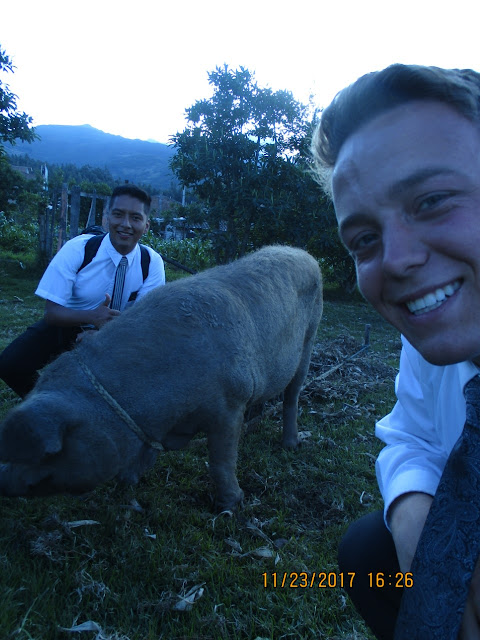 A pig with Elder Flores 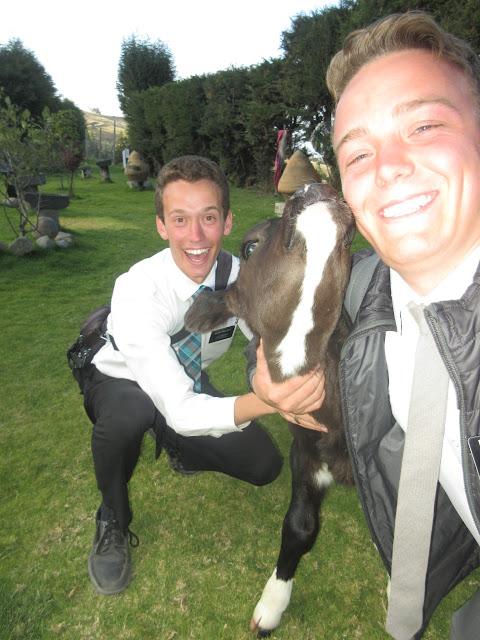 Posted by Laura Copeland at 12:32 AM No comments:

Tuesday.  Today we started off going to visit some references that we got from the missionaries, and they were so cool.  They started reading the Book of Mormon right after the visit, and they came to church, so I'm excited for them. Also, we visited some more of our investigators, and I got to meet them.  They were so cool.

Wednesday.  So in Cayambe, we are so far away from everything so it takes forever to get place to place, but it's honestly the coolest place ever.  We went and taught a young couple that was about an hour away on bus and 15 mins. walking on a dirt road, but it was worth it.  They drove down from their house which is on a mountain on their motorcycle just to listen to us, and they loved it. Their names are Juan and Maria.  They're so cool

Thursday.  Today was a frustrating day.  We contacted the whole day and didn't find too much, but we did teach one of our families that has a baptismal date, which I'm excited about.  They're are so cool.  The little kids are always talking about how they want to go on a mission

Friday.  Today we had to go far away and teach another family, and they loved it, too.  The other family that we taught today are getting baptized this week, and they are so ready. They are honestly so cool.  We're going paint balling with them next Monday.  I'm so excited for their baptism this week.

Saturday.  Today we had the interviews for Fam Truijillo and they all passed. Afterwards, we went to a member's house and cooked some tacos, which was so fun.  They don't know how to cook tacos, so they just asked me and they were soo good.  Wow!  I miss food!  Then we taught Juan and Maria again and they accepted the baptismal Invitation, which was awesome. 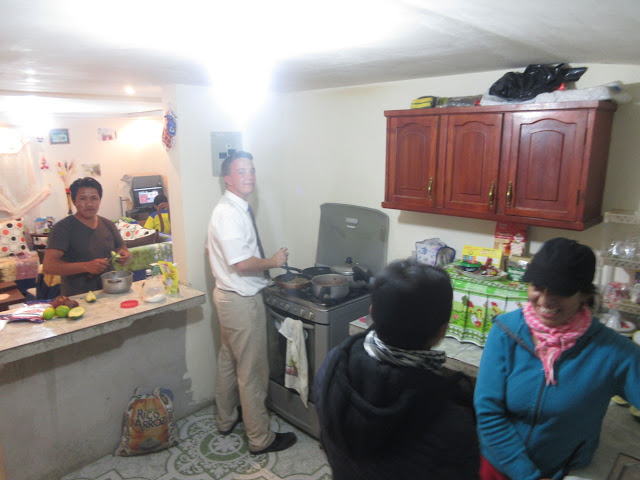 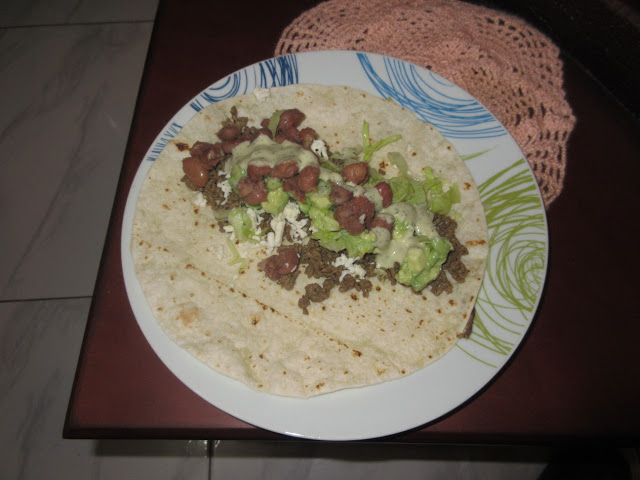 Sunday.  So here there are not a lot of members and the chapel is so so so small.  It's weird.  So we got put in charge of teaching 2nd and 3rd hour, which was kind of frustrating and stressful.  After, we went to an investigator's house and she lives literally on top of the mountain.  It was so beautiful, to be honest.  They survive off their farms pretty much.  They have 30 cuye (guinea Pig) waiting to be eaten, and we taught their family after, which was awesome.  Love, Elder Copeland 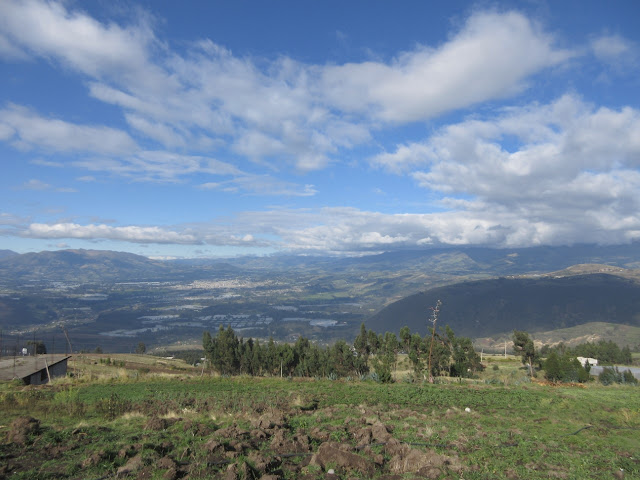 Posted by Laura Copeland at 3:07 AM No comments: